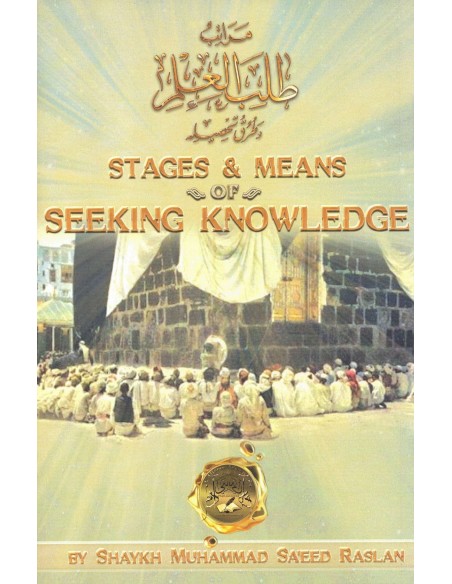 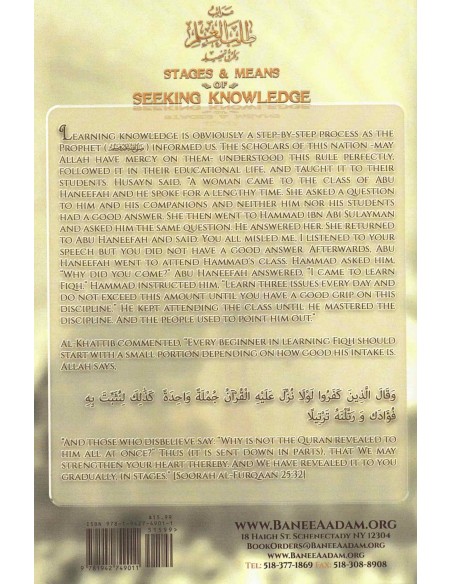 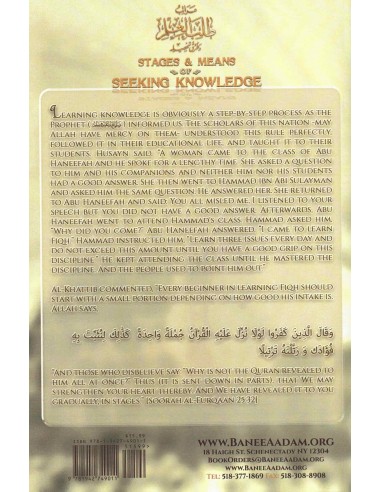 And those who disbelieve say: "Why is the Quran not revealed to him all at once?" Thus (it is sent down in parts), that We may strengthen your heart thereby. And We have revealed it to you gradually, in stages. ”[1]” [2]

Al-Zarnooji -rahimahullah- said, “Imam Sharf ul-Din al-Uqayli - rahimahullah- used to say,“ My opinion regarding learning knowledge is in agreement with what our teachers taught us. They used to teach beginners level one books because they are understandable, easy to memorize, enjoyable, and common. A beginner should not write down something he does not understand because it numbs the intelligence and is a waste of time. Instead, a beginner should focus on the task of understanding his teacher through deep thinking and repetition. Significantly, the smaller the portion in one class with repetition the more progress in understanding. A famous saying states: Memorizing two letters is better than hearing two loads, and understanding two letters is better than memorizing two loads. ”[3]

Al-Ghazali –rahimahullah- said, “A student of knowledge should not start learning a discipline all in one time. He should rather follow an organized strategy starting from the most important discipline because it is impossible for anyone to learn all disciplines in a lifetime. The right thing to do is to learn the most important portions of every discipline. It is strongly advisable for beginners to stick to a single discipline until they finish it and then move to another one. The reason is that some disciplines are organized on levels. A guided student would follow this gradual process. ”[4]

That which harms knowledge and its people is when the student restricts himself to gradual study of the subsidiary books that branched off the major books authored by major Sheikhs. Those subsidiary books have inflicted a serious damage on the educational process and those involved in it. This damage led most of the students to waste their time in studying them while missing the core fundamentals of disciplines found in the major books.

Ibn Khaldoun [5] complained about this saying, “Diversity of terminologies and the multitude of authored books have inflicted a serious damage in education because a student is thereby demanded to memorize and recollect all of those terminologies or at least most of them. Certainly, the student's lifetime is not enough to study all of the books authored in a single discipline. This of course has caused a significant lack in the acquisition of a given discipline.

For instance, there are books that detail the Maliki School of jurisprudence. A seminal book in this school is named “al-Mudawanah”. Multiple explanations on it were authored by ibn Yunus, al-Lakhmi, and ibn Bashir. Furthermore, a student is required to study and distinguish between the various approaches that teach this Maliki School. Those approaches are taught in Baghdad, Qayrawan, Egypt, or in Cordoba, not to mention the approaches that were developed after them. While in reality, a lifetime is only enough for studying one approach only.

If only teachers restricted themselves to teaching their students the basics of any discipline, learning would be much easier and beneficial. However, this above-mentioned method of education has become as rooted as an inborn nature resistant to any modification or change.

Another instance is found in the books that explain the Arabic language from the book of Sibawayh [6] “al-Kitab”. Lots of commentaries were written in addition to the copious teaching approaches of different schools in Basra, Kufah, Baghdad, Andalusia; besides the approaches of scholars like ibn al-Hajib, ibn Malik, and others who taught this book. The student is demanded to cover these huge stacks of different books and approaches. It is extremely rare for someone to cover all of them.

One exception is Ibn Hisham [7], the Egyptian, who authored a book in grammar that reflected mastery in this discipline similar to that of Sibawayh, Ibn Jinny, and those in the same level as them. He mastered the fundamentals and everything related to grammar. Notably, such an extremely rare example proves that mastery is not exclusive to earlier scholars despite the aforementioned distractions. It all comes down to Allah Who gifts whomever He wills. However, generally speaking, a student who spends his lifetime seeking to learn linguistics, which is merely a tool for the more important disciplines, would not cover the entire subject. ”[8]

Ibn Khaldoun wrote a very critical and a must-read chapter in his book. Everybody who is in the teaching profession must read, understand, and consider it a measurement to which his teaching performance is measured.

[5] - Translator's Note: Ibn Khaldūn was an Arab Muslim historiographer and historian. He is regarded to be among the founding fathers of modern sociology, historiography and economics. He is best known for his book The Muqaddimah. He was born in 1332 and died 1406.

Maktabatul-Irshad
No reviews
Tap to zoom