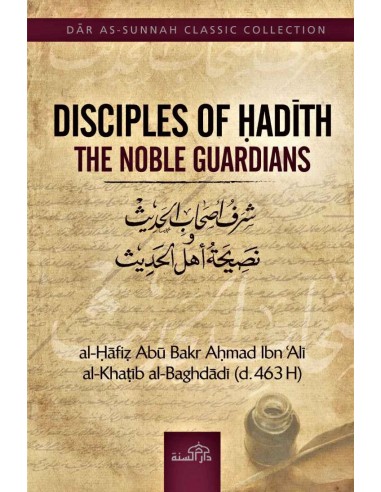 Disciples of hadith: the noble guardians

Numerous books have been written on the subject of the Hadith sciences, the special status held by the scholars and the nobility of those adhering to the Sunnah and the scientific reports about it. This book is one of the best in the field in the way it is arranged and the ease with which one can understand its contents. Al-Khatib narrates prophetic traditions, sayings of the Muhaddithīn and renowned scholars, through its own chain of traditions (isnād); and this is a very unique feature of this book.

Ibn Hajar accurately noted: "Any objective person knows that the scholars of Hadith who come after Al-Khatib are indebted to his works." It is not difficult to see why that is the case, since Al-Khatib was of the last generation of titans that stood out above others. He wrote a number of pioneering works in Hadith literature.